Maid Servant in a Rich Man’s House; Processwork on Roles and Rank

Shri Ramakrishna (1836-1886) is one of India’s most revered saints.  Near Portland, OR, a shrine is dedicated to him and his followers in Scappoose, along with an ashram in SE Portland.  On NW 23rd Avenue, I saw a portrait of him in a meditation room.

As a young girl, I recall reading aloud to my father from “The Mission of Shri Ramakrishna”.  My father was a follower and this was his way of teaching me the precepts.  At the time, I didn’t care for the teachings.  Decades later, I’m reading the same book in a reading circle in Bengaluru.

One of Shri Ramakrishna’s instructions is: Live like a maid-servant in a rich man’s house.

In today’s world this statement brings up issues of rank – gender, class, economic, social, etc.  We can debate it from our current socially evolved lens ad nauseum and easily dismiss it as irrelevant.

Processwork tells us that rank is fluid and flexible, and that we are generally unconscious of our high rank, whilst frequently identifying with our low rank.  We take on roles unconsciously.  However, with awareness, we can pick up, drop, and even switch roles.

Many hard-working, successful people become extremely wealthy over the years.  Are they enjoying the good life?  Hardly.  They are caught in the trap of constant vigilance for competitors, always attempting to keep up peak performances.  So, they are constantly stressed out, anxious, and fearful.  They are not living the life of the rich man, in spite of being one in reality.  They are indentured to their business, maid servant to the call of the cash register.

If these individuals took ownership of their success, and then lived like maid servants, they could be truly happy.  But they are so far disconnected from their material reality and their emotional greed, they are trapped to live a life of fear and anxiety.  Their wealth becomes a heavy burden to carry; their success is a whip constantly lashing at their backs.

A mother is highly concerned about her two adolescent sons who are energetic, fearless, and adventurous.  In the role of the maid servant she would be there for them, provide food, shelter, and a clean, safe home.  She acknowledges that they are exploring their boundaries, getting to know and test themselves and the world they live in.  She goes on to carve an independent identity for herself beyond being just a mother.  The boys discover the ways of the world and become strong independent people living authentic lives.

If instead she chose to be the rich man – ever-vigilant, demanding, having unrealistic expectations of obedience and domesticity, it would cause this family undue trauma.

Being Practical in Relationship

An attractive, well qualified, employed young woman in her late 30s is desperately seeking her life partner.  She wants to start a family.  Few men can match up to her expectations.  Like a rich man, she has been shopping around.

If she saw herself as a maid servant, she would check out her options by prioritizing her needs, as would anyone who were seeking out terms of employment.  Does she have the required skills?  Is she willing to commit?  What does she expect in return?  When does duty end?  Are her skills aligned to the task at hand?

Few of us ever want to look at relationships with such practicality.  Being giddy headed, and swept off one’s feet is the desired norm in romantic relationships.  Its outcome is usually enormous loss, heartbreak, pain, loss of selfhood.

An engineer working in a software company is being constantly dumped on by her male colleagues.  Her traditional Indian upbringing – to be obedient, docile, quiet, taking care of others and looking out for their preferences and needs – no longer serves her well in the corporate environment.  All was well when she was the maid servant in her father’s house.  As a manager, she needs to embrace the identity of the rich man.  She must now consciously connect to her high rank and take ownership of it.  Once she becomes conscious of her maid servant demeanor, she will be able to embrace the rich man within her, switch roles, and become an exemplary leader in the organisation.

In the age of the pandemic, one of the biggest difficulties has been for the rich man to be the maid servant.  As an entitled society enjoying our freedoms and privileges, we resent being told what to do and how to do it.  The need to be a rich man is deeply engrained in us.  We fear that if the rich man goes away, we will be nothing.  The fear and uncertainty lead us to indulge in risky behavior.

If we were to feel less entitled, we wouldn’t mind being the maid servant now for the time being.  As a maid servant, we would carry in our hearts our very own real homes that we would one day return to and so we’d feel secure and complete even as we toed the line and followed new rules.

My Personal Rich Man and Maid

This saying is a truism in my own life.  In my 30s, I was the entitled rich woman with a great career, a picture-perfect family, economic security, and social status.  Halfway through my 40s when things began to unravel in my own life, I realized that I was being the maid-servant; much to my horror!  In my 50s, Process Work has taught me that I am both the rich man and the maid servant.  This means that I can choose to now enjoy my riches, knowing I must do my duty with due diligence as a maid servant.

Crossing the edge from rich man to maid servant or vice-versa is difficult.  When we cross it, understand that we are both the rich man and the maid servant simultaneously, it helps us to navigate life better.  Knowing which role to take on when, is the path to a better way of being. 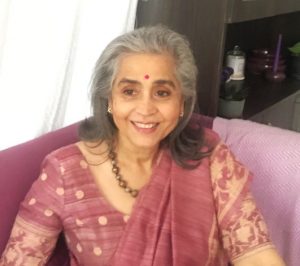 Kalpana  has an MA in Medical and Psychiatric Social Work from Tata Institute of Social Sciences,  and has worked for 20 years in the field of qualitative market research in the 80s and 90s in Mumbai, India.

From 2002-10, she lived in Portland, Oregon, to pursue her MA and Diploma in Processwork.  In India, from 2010, she introduced and taught Process Oriented courses and workshops for nine years at the Srishti Institute of Design in Bengaluru, and has been in private practice working with individuals and families.

In her vlog, Navigate with Kalpana, she shares her wealth of experience and expertise as a psychotherapist, conflict facilitator, and educator.